*SPOILER ALERT: contains SPOILERS for FIRE AND THORNS, THE CROWN OF EMBERS, and THE BITTER KINGDOM* 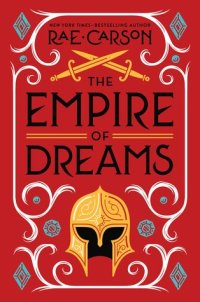 Even though Red Sparkle Stone is a foundling orphan with an odd name and a veiled past, she’s about to be adopted into the royal family—by Empress Elisa herself. Sixteen-year-old Red can hardly believe her luck. Then, in a stunning political masterstroke, the empress’s greatest rival blocks the adoption, and Red is left with no family and no future.

Grieving and lost, but determined to find her place, Red hatches a daring plan: she will prove herself as a recruit for the world’s most elite fighting force, the legendary Royal Guard—something no woman has done before. But it’s no coincidence that someone wanted her to fail as a princess, someone whose shadowy agenda puts everything she loves at risk. As danger closes in, it will be up to Red and her new friends—and maybe some new enemies—to save the empire. If they can survive recruitment year.

I was honestly rather scared going into this book. I adore the original trilogy – it remains my favourite series of all times, and the second book is still my favourite book, hands down. I’d also just binged the trilogy in 2 days, which reminded me all over again why I love these books so much. Therefore, I was rather worried this book wouldn’t live up to the originals.

However, I absolutely adored it, racing through it in a matter of hours. It’s fast-paced, with all the atmosphere and world that made the originals so brilliant. This book expands on ideas in the short story THE KING’S GUARD (which is about Hector’s training), and I loved seeing more about the Royal Guard. It also has some flashback chapters about Red’s life that are really heartbreaking.

Rosario and Red’s relationship is incredible – I love strong sibling bonds, and this one is the heart of the book. Red’s loyalty to the ideals of the Royal Guard is so much stronger than those around her because she’s loyal to her family, and that really helps distinguish her from the others. I also liked that there wasn’t a romance in this book – just a potential relationship for her future. This is a book about family.

It’s also really nice that the stronger of her “parental” relationships is with Hector. Because he hardly narrates in the original trilogy, save for a few chapters in the final book, everything about him is filtered through Elisa’s eyes. This opens up another side of him (and the final scene with him is so sweet).

I loved that Elisa and Hector are present but not overshadowing the book. It means the story and characters can stand on their own legs. Instead, we follow Red through the troubles of being an part-Invierno in country still uneasy with them, as she tries to prove herself while coping with PTSD.

There is so much more I could say about this book, but a lot of it would be the gushing praises of world and writing that can be found in my reviews for her other books. Instead, I will say that I didn’t need to be afraid of reading this, and it was such a joy.

Read my reviews of other books by Rae Carson:

Fire and Thorns (this series):

2 thoughts on “Book Review: THE EMPIRE OF DREAMS by Rae Carson”