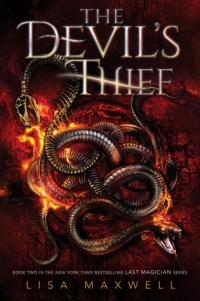 Hunt the Stones. Beware the Thief. Avenge the Past.

Esta’s parents were murdered. Her life was stolen. And everything she knew about magic was a lie. She thought the Book of Mysteries held the key to freeing the Mageus from the Order’s grasp, but the danger within its pages was greater than she ever imagined.

Now the Book’s furious power lives inside Harte. If he can’t control it, it will rip apart the world to get its revenge, and it will use Esta to do it.

To bind the power, Esta and Harte must track down four elemental stones scattered across the continent. But the world outside the city is like nothing they expected. There are Mageus beyond the Brink not willing to live in the shadows—and the Order isn’t alone in its mission to crush them.

In St. Louis, the extravagant World’s Fair hides the first stone, but an old enemy is out for revenge and a new enemy is emerging. And back in New York, Viola and Jianyu must defeat a traitor in a city on the verge of chaos.

As past and future collide, time is running out to rewrite history—even for a time-traveling thief.

A fun second entry, but too long and over-ambitious.

I enjoyed coming back to the world and joining Esta, Harte, Viola and Jianyu again. That part of the book moved across to St Louis was a nice touch of fresh air.

The book suffered from too many POVs, which made it feel like far too much, and yet far too little, was happening at the same time. It’s not a contradiction, I promise, and it’s a topic I want to break down in detail in a post some time because it’s really gotten me thinking.

THE DEVIL’S THIEF has 14 POV split over two timelines, as far as I can tell (a neat 7 in each). Some are very major POVs, and others feel so minor, popping up only occasionally. They might only have two or three chapters. A couple have only one. These minor POVs (off the top of my head: Ruth, North, Maggie, Julien, Logan, Ruby) really don’t add anything, in my opinion. All they do is make the book feel bloated and over-stuffed (too much), but they also serve to make the story lines feel very simplistic (too little).

Why? Because it can be several hundred pages until a POV comes back (Viola’s was missing for ages). This means that no plot line can be all that complicated without the book descending into an incomprehensible mess. And a lot of memory jogging goes on, which only adds to the sense that not much is happening.

It didn’t help that there is no clear through plot. Every 100 pages of so, every character gets a new goal, so it feels like it’s lurching about from idea to idea. Or lots of smaller plots strung together.

I wonder how this book would have worked split in two – a 1902 book and a 1904 book. Everyone would have probably hated on the 1902 book because it lacked the main character, Esta, and the principal secondary character, Harte.

All the jumping around and POV made it so hard to work out what was happening in the finale. Not to mention they ended on a tension point, and then copped-out finding a resolution as the next chapter was days later with ‘Esta wasn’t sure how she escaped’. Right. Thanks for that let down.

The magic is very vague, and I’m even less clear about who can do what. Not to mention this weird possession angle that comes in late to the game.

I will read the next entry, because I want to know how it ends.

Read my reviews of other books by Lisa Maxwell

The Last Magician (this series):